Tag Archives: before and after

Training With Prior Issues/New Injuries

I figure, that due to almost rendering myself unable to train yesterday due to massive pressure on my left side (that I ignored) it’d be prudent to make a post like this, as all of us at some point or another will suffer some level of injury that hinders our training; whether it be for a few days or a few months – it’s a good idea to be aware of some of the basics for training with injuries/issues.

I’ll use myself as an example; I have a series of issues with my back & sometimes it can flare up & render me to an almost immobile state – over the weekend I felt my left hip beginning to burn; the first sign of more pain to come.  It must’ve been bad as I had terribly interrupted sleep on Sunday, however I still went to the gym on Monday. I was doing ok until I got to 40kg barbell squats, did one….felt a pull across my entire lower back & made a noise that may have been heard by hades himself…I heard it & I had headphones in.  TBF, should’ve know as after I walked up the stairs I could feel my hips rubbing.  Sounds gross & painful??  Yeah, it is.  Anyhoo…..I was training on my own.  SHIT!  What do I do??  The urge to run downstairs, cobble my gear together & get the fuck out of the gym was my first thought.  However, I seem to be growing as an individual, so I racked the bar & attempted to compose myself.  I managed to (while thinking lots of encouraging things) do another one before I decided that it was probably wiser to drop the weight down, so I took 10kg off & did 10 reps before deciding that it may not be wise to continue with more reps.

Because of this, I began to wonder what would I do if I’d injured myself further or if it was a new injury & I didn’t know how to deal with it. The misconception that you should rest all injuries is still pretty popular & couldn’t be further away from the truth, resting completely can cause issues along the road – sitting immobile while you heal is gonna cause hindrance as the muscles seize up over time, making recovery longer and more painful.

You can still train if you’ve broken a limb, you can still go to the gym if you’re full of cold, you can even go to the gym after breaking your nose & recovering from concussion! That last one, I did actually do.  I just made Andy aware of how I felt & whathaveyou before we began training.Which leads me to how do you know if you’re fit for the gym? I’m came up with my own little checklist:

So. 5 months in from when I vowed to stop being a lazy/easy option out/take all the painkillers kinda person. Let’s see where we are….

I’m gonna attempt some detail about my progress, but I’m not sure what I’m going to add, so I may ramble.  Anyhoo, first up I thought it’d be good (read: heinous) to have a starter image with a recent one, so here you go: 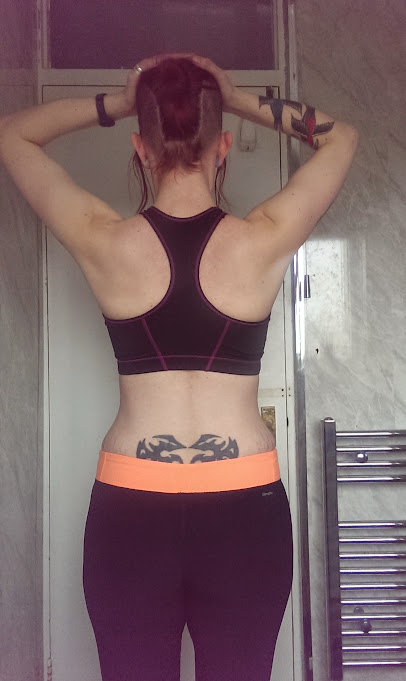 Holy Shit! I mean, I know I’m smaller than I was, but

I’m kind of appalled with myself for accepting how I was for as long as I did.

I’ve been told to be more accepting of praise, positive comments & to accept that I am actually an inspiration.  I’m gonna try to accept it, my before & during snap shot is probably gonna help me to take the encouragement head on instead of shirting around it.

Possibly the most surprising about my “fitness” journey is how much has gone from my hips; around 5″ so far.  The trousers I’m wearing in the above images I bought in April 2014 & when I did they fit just below the natural waist line.

I never actively sought weight-loss, but it is a pretty big side effect of lifting weights & cycling over 100 miles a week, most weeks.  However, I guess it’s kinda contradictory in terms as I *did* change my eating habits, which then has helped the weight loss.  Although that might be a little weird as I eat more now than I have in years! Don’t get me wrong; there are days where I won’t have prepped food, or I’ll give in to a craving. However I can reign it back in….I’ve never really been “overweight” not in the morbidly obese sense anyway.

Part of my desire to change my eating habits was down to being told that under eating can have a worse effect on your muscles and can in-turn make you flabbier than you were.  That was new information to me, I’m not sure how I thought it worked, but I never thought of working out could lead to less definition – but this is why there are trained professionals out there to be able to guide the clueless………..

Perfect examples of what I eat, steak with grilled courgette & Teriyake Chicken with cauliflower “rice”. Most of our food is prepared on the day, but I will make things in advance – especially for work as rushing out to find something to eat can be disastrous, even if you think you’re choosing the healthier option, you might not be.

*I think I’m losing my point….hang on*

One of my favourite images of me, I use it as my profile pic on Fitocracy & The Neila Ray Forum – both insightful, and both extremely different websites; worthy of a look though.  I’m not overly active on them, but they’re there, as well as xxfitness on Reddit.

What I adore about that image is the way the lighting in my bathroom seems to capture the new definition in my back.  It’s pictures like this that help me to get up at 05:30 every morning & cycle to the gym….I say every morning; 3…sometimes 4 mornings a week.  Mostly three, but it’ll get to 4 more regularly.

My PT commented the other day that my progress pics are usually of my back, but I do sometimes take pics from other angle, however I hate them.  This post is supposed to detail my progress though, so I’ve added them. Er, Images with grey leggings are from about September, black leggings images are November.

Today (February 2nd) I whacked the leg press on 93KG & managed a decent amount of reps, I remember it wasn’t too long ago that I struggled to do 50KG….I *did* try to go over 100KG, but I didn’t move! Then there’s also the fact when I started cycling I could just to say cycle stood up – cycling today was predominantly stood up.  I have to keep stopping to blow my nose though cos me & cold weather don’t get on.